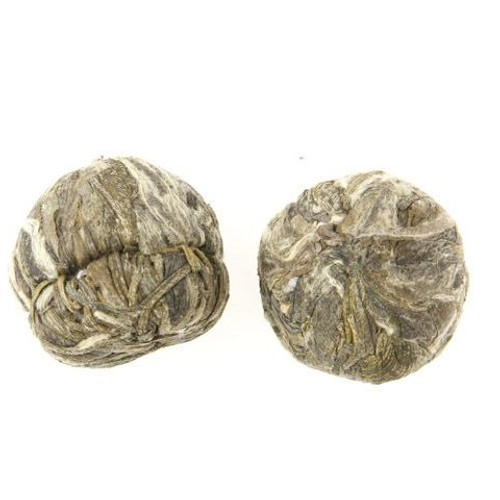 Cup Characteristics: Light lavender notes wind their way through a floral bouquet and provide some depth and body to the early season green tea.

In ancient China dragons were thought to be an exceptionally ostentatious creature. Their physical form was commonly depicted as incorporating characteristics of many different animals, all of which were considered sacred. They had the body of a snake, the scales of a fish, the antlers of a stag, the face of a camel, eagle's talons, ears of a bull, feet of the tiger and eyes of a demon. One variety of dragon in particular was considered very special, the Fucanglong, dragons that guarded treasure. The treasure could be gold, jewels, state secrets, magical potions and everything in between. They were so powerful it was said that when volcanoes erupted, it was the Fucanglong bursting forth from the centre of the earth to report to heaven on the status of their holdings. Chinese tea legend has it that at some point during the early part of the last century, a tea artisan from Fujian province was visited in a dream by a Fucanglong dragon. The dragon told him to craft a tea that represented his protective powers. If he did so the artisan would achieve great success and grow wealthy. The tea he created used the petals of 4 flowers, wrapped up inside full leaves of fresh green tea. The leaf depicted the dragon's scaly skin while the flowers represented his treasure. The Artisan took the tea to market and ture to the dragon's word he had a hit on his hands and quickly sold out of all the tea he had created. Brew a pot for yourself and you'll quickly discover why the first batch of Dragon Flowers sold out so quickly. On the nose the infused tea is a delight, hinting a Fujian garden in the springtime. The cup displays delicate, exceptionally fresh hints of grassiness that intertwine with the intricate melange of the four flowers.

Hot Tea: Place one ball in your teapot and add water that is roughly 194'F/90'C. Infuse until the ball is fully open, usually about five minutes. Watch the long leaves unfurl to reveal the hidden flower treasure.