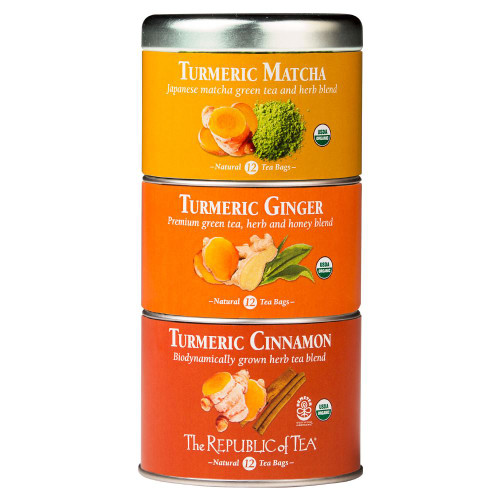 Turmeric Matcha: Organic Tea For Flexibility*
Turmeric, ginger and green tea have been reputed to support the body's response to inflammation so joints, ligaments and muscles can stretch more fully.* Matcha lends a smooth finish and lasting energy.

Turmeric Cinnamon: Organic Herbs - Farm to Cup
The spices in this herbal blend are grown by a collective of certified Biodynamic™ farms in Sri Lanka committed to biodiversity and sustainability. Turmeric and cinnamon give way to an earthy and full-bodied cup.

*These statements have not been evaluated by the Food and Drug Administration. This product is not intended to diagnose, treat, cure or prevent disease.

Turmeric Matcha
Heat 6 ounces of water to just short of boiling. Add one tea bag and infuse for 2-3 minutes.

Turmeric Ginger
Heat 6 ounces of water to just short of boiling. Add one tea bag and infuse for 1-3 minutes.

Turmeric Cinnamon
Heat 6 ounces of water to boiling. Add one tea bag and infuse for 5-7 minutes. Also nice cooled and served over ice with a touch of lemon and sweetener.

Turmeric Ginger
Green tea contains less than a quarter the amount of caffeine per cup than in a similar-sized cup of coffee.