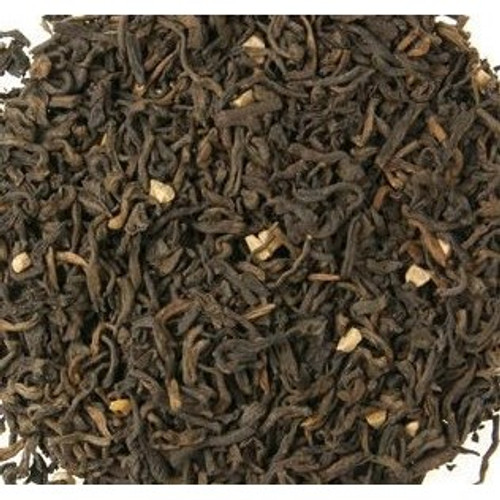 Dessert in a cup. The earthiness of pu-erh fuses with caramel for a sweet decadent finish.

Introducing the favorite beverage of the Scotland-China Association. The SCA was founded in Glasgow in an effort to strengthen ties between to very different countries and offers seminars in Traditional Chinese medicine, language courses and more. The first recorded encounters between the two occurred in the 17th century, during the days of the old British Empire. At that time the world of the Orient must have seemed wildly foreign to the Scottish officers and merchants who made their way across the Pacific to visit the port cities of Canton and Shanghai. Over the centuries, relations between the two countries continued to develop but it wasn't until the 1980's, with China's Open Door Policy, that things really began to heat up. Since then, the Royal Botanic Garden of Edinburgh began working collaboratively with Chinese botanists, Napier University, one of Scotland's finest, established a permanent presence in Beijing and the Royal Society of Edinburgh and Chinese Academy of Sciences developed a Mermorandum of Understanding to facilitate scientific research between the two countries. Who knew? In an effort to to strengthen ties between Scotland and China, (a pet project of the Master Taster...strange considering he's Dutch) we're proud to present the only tea in existence known to link the two vastly different cultures - Scottish Caramel Pu-Erh. Now for those of you who are scratching your head over this flavor combo, scratch no more. Amazingly, the sweet, burnt sugary profile of Caramel blends in perfect harmony with the loose leafed pu-erh.

Hot Tea: Put 1 slightly heaping tsp. of loose tea for each 7-9oz of water in the teapot. Pour freshly boiled water over tea. Steep 3-7 min. Milk and sugar are not recommended.